Tony Linsell - this article first appeared in The Steadfast Journal

First it should be made clear why the word heathen rather than pagan is used here. They mean much the same but heathen is the English word and pagan the Latin. That is reason enough but extra weight is added by the fact pagan is used by tree-huggers and those who prefer to celebrate Irish festivals such as Imbolc, Beltaine, Sahain. I hate to be provocative but pagan is for girls and foreigners.

Every year in the period leading up to Christmas we are likely to hear one clergyman or another complain that the true meaning of Christmas has been lost. Surprisingly I agree, but not for the reasons they suggest. Christians have taken the heathen festival of Yule and tried to make it their own. The heathen way to celebrate Yule is by eating and drinking with friends and family and having a good time. I’m pleased to see that the English instinctively know this. Forget presents - except for children - just eat, drink and be merry.

Before Augustine came to England and set about converting the various English kings to a foreign creed we English had our own creation story, our own gods, our own communal history, and our own laws and values by which we lived and prospered. After the conversion our beliefs and customs were supplanted by a foreign creed which cast our gods as devils, and those who worshipped them as devil worshippers.

The conversion of the kings came about because the Church was able to make them an offer they couldn’t refuse. In essence the deal was this, convert to Christianity and we will provide you with:-

In short, join our alliance and strengthen your ‘right’ and ability to rule.

It looked a good deal but what did the Church want in return? The cost was a transfer to the Church of power and wealth (provision of land, money, and taxes – some in the form of labour, food and fuel) and the right to eliminate all beliefs and practises that competed with Christianity. They weren’t so keen on inter-faith dialogue in those days.

From the assorted snippets of information we have about the heathen calendar and time-measuring we know that the heathen calendar was a combination of months measured by the moon; and days, seasons and years measured in whole and part by the sun (day and night, winter and summer). In such calendars the solstices and equinoxes are of great importance.

A fortnight means fourteen nights (O.E. feorwertyne niht). The word ‘moon’ comes from O.E. mona, and ‘month’ is from O.E. monað, meaning the period from one moon to the next. Modern heathen English belief is that each day starts at sunrise.

The heathen calendar was based on observation – the end of one year or day and the start of a new one was indicated by the sun. There was no need for leap-year calculations or special knowledge; the length of the shadow from a fixed pole was there for all to see – the shadow was at its shortest at the summer solstice and at its longest at the winter solstice. It was also known that the shadow of a fixed length vertical pole varied according to latitude. In other words, it was possible to calculate how far north or south one was. And no, they didn’t think the earth was flat.

Months of the Year

Æftera Geola – After Yule (January). The first day of Æftera Geola was midwinter day, which was also new year day (now 25th December). Midwinter day began at the fourth sunrise after the winter solstice. Yule was the instant the sun rose and brought an end to the old year and a beginning to the first day of the new year. There followed twelve days and nights in which there was celebration of the passing of midwinter and the return of brightness and new life. This holiday (holiday from OE haligdæg meaning holy day) lasted until the twelfth night of Æftera Geola  (now 6th January).

It is probable that a fertility ritual involving ploughs took place on the first Monday after twelfth night – Plough Monday. 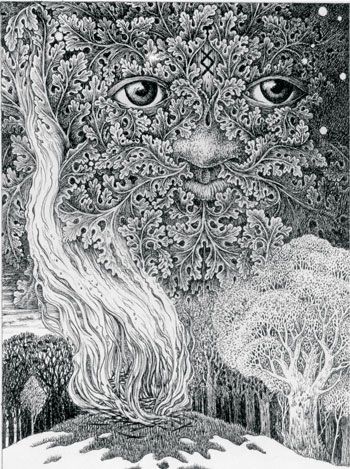 Sol-monaþ, Mud Month, (February) which was, according to Bede, popularly known as “the month of cakes”, a time when the English made offerings to the Earth Mother. Most ploughing would have been in Sol-moneð when the ice had gone and the ground was soft enough to take the plough. Some sort of ritual probably took place – perhaps a loaf (cake) baked from grain set aside  from the previous harvest was ploughed into the first furrow cut in each strip or field and represented the impregnation and fertilization of the earth.

Hreð-monaþ (March) Month named after Hreð, a waelcyrie [valkyrie]; the last month of winter. Hreð is associated with glory, fame, triumph, honour, particularly as gained in combat. Waelcyrie flew across battlefields collecting the souls of the dead; their presence was represented by a wind or by crows. Hreð was perhaps associated with the winds that blows during Hreð-monaþ. Birds start laying eggs in Hreð-monaþ and this, and the ancient association between eggs and fertility, gave rise, in this month and the next, to festivals connected with eggs (Shrove Tuesday - pancake day).

Þri-milce, Three Milkings. (May) – In that month they milked their cattle three times a day.

Ærra Liða, the month before Midsummer (June). The meaning of Liða is uncertain (might be associated with the moon) but it was probably the name given to either sunrise on the longest day – the height of the sun’s power - or the midsummer day sunrise (four days later) which marked the sun’s retreat from brightness and growth and brought the onset of darkness and decay. Whatever the case, it is probable that Liða was a fire festival and that it involved celebration of the passage of the moon.

Weod-monaþ, Weed Month (August) – because weeds grow most in that month.

Halig-monaþ, Holy Month (September) – when offerings were made to the Earth Mother and Harvest Queen. Produce from the harvest was left at wells, springs, pools and other holy places at the equinox.

Blot-monaþ, the Month of Sacrifice (November) – this is the month for slaughtering cattle that cannot be over-wintered. As animals were slaughtered they were dedicated to the honour of the gods. 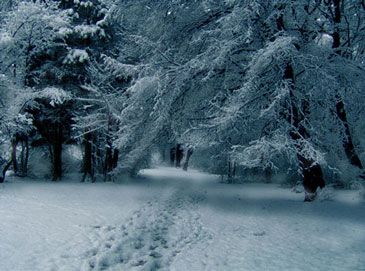 Ærra Geola, before Yule (December) Yule marked the death of one year and the birth of the next. It is associated with Ing and the Green Man, who were perhaps the same being.

It is probable that twelve nights before midwinter day there was a fire festival which anticipated the turn of the year and gave praise to the sun. The night before midwinter sunrise was called Mothers’ Night (Modranect) and might have been a festival that honoured all mothers and in particular the Earth Mother who gave birth to a son called Ing, the God of Brightness who represented rebirth. The symbol of Ing is the boar, and a boar’s head is traditionally served on a bed of greenery on Midwinter day (now Christmas Day). If the Night of Mothers was a celebration of the Earth Mother and her giving birth to Ing, a sky god, it would explain why the Church chose to celebrate the birth of Christ on that day and it would suggest that across Northern Europe all the people of Ice, Fire and Steel celebrated in a similar way.

Augustine
Augustine set in process a chain of events which led to the conversion of powerful families but he had little to offer the ordinary English folk. Contrary to the story told by the Church, people did not flock to baptisms because they saw the light of truth. Mass baptism where the result of kings instructing people to attend them. The Church never managed to obtain a full and voluntary conversion; it was a matter of slowly and deliberately changing customs and re-writing history – something we know of today and to which I will return at another time. All that need be said now is that when all else failed it was made unlawful to practice heathen ways, and the punishments could be severe.

Techniques of Persuasion
Augustine wrote to Pope Gregory asking for guidance on the conversion. The Pope’s reply suggested a strategy whereby the people were encouraged to accept change little by little; adapting the old customs from one generation to the next, so that new customs were introduced and heathen traditions gained a Christian veneer. The heathen festivals were given Christian connotations, but some festivals were so firmly linked with the seasons, the agricultural year and the Old Ways that their heathen names lingered on. Thanks-giving services were held but thanks were offered to the Christian god instead of the Earth Mother. The need to balance the Sky Father with the Earth Mother eventually led to the cult of the Virgin Mary.

The policy of adapting and modifying what already existed was clearly set out in a letter from Pope Gregory to Abbot Mellitus in 601. In it he asked Mellitus to inform Augustine that, after giving careful thought to the affairs of the English, it had been decided that on no account were the temples of the idols to be destroyed:

“The idols are to be destroyed but the temples themselves are to be sprinkled with holy water and altars set up in them, and relics placed there. If the temples are well-built, they must be purified from devil-worship and dedicated to the service of the true God. In this way, it is to be hoped, the  people, seeing that their temples have not been destroyed, will abandon their idolatry and continue to go to those places and come to know and revere the true God. And since it is their custom to sacrifice many oxen to the demons, let some other rite be substituted in its place such as a day of Dedications or the festivals of the holy martyrs whose relics are enshrined there. On such high days they might well build shelters of timber for themselves around the churches that were once temples and celebrate the occasion with devout feasting. They are no longer to sacrifice animals to the Devil, but they may kill them for food to the glory of God and give thanks to the Giver for the plenty they enjoy.  . . . They are to offer the same animals as before but instead of offering them to idols they are to offer them to God, so that they should no longer be offering the same sacrifice.”

Despite the Church doing its best to bury heathen beliefs and practices we have information about them from laws which forbade such practices, and we have documents such as the letter from Pope Gregory, which indicates that the whole community came together in the temple enclosure on feast days to make sacrifices and to make merry. Evidence from Sweden supports the view that heathen temples probably had within their enclosure a tree or wooden pillar, and a spring, or well, or pool of water. Many churches, certainly the older ones, were built on the sites of heathen temples and that would explain the association between ancient churchyards and yew trees, a holy tree of the heathen English.

So, Yule marks mid-winter and the turning of the year – the change from death to life, from darkness to light.