Maybe it's because of our English arrogance, but we tend to think that we have produced more great or famous people than any other nation. Maybe we have, maybe we haven't. But how many famous Dutchmen can you name? What about Belgians? Portuguese or Hungarian? Well, maybe they aren't too clued up on anyone from our country either. But the fact remains, how many times have you been in some far flung corner of the globe when some recently discovered tribe member realises you're from England and comes out with that old chestnut "Ingleeesh! Aaahhh, Babbi Chal-tin" (for people with an IQ below 5, the answer is below).

So, we've put together a small list of the good and the great (more are being added all the time). Some you will know others you may not. These are people who have helped spread our influence, culture and status. These are people who have changed the course of history - people who have left there mark in England, if not the world. Learn their names and remember that they represent all that is best in our great nation and that part of each of them still exists today in every Englishman.

The Venerable Bede was born, plain old Bede, in AD 673. The name Venerable – meaning ancient and worthy – was added later as he grew older and his fame as a scholar spread. He was born on the grounds of the monastery he was later to make famous and in which he was to serve as a monk for over 50 years. [click for more]

"Then, in the same year, passed from the world the magnanimous Alfred, king of the Saxons, unshakeable pillar of the people of the west. Aman full of justice, active in war, learned in speech, and, above all, instructed in divine learning. His body rests in peace in the city of Winchester. Now say, reader,"O Christ our Redeemer, save his soul... [click for more] 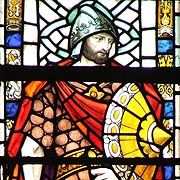 King Athelstan struck his enemies with fear, by terror of his name alone. "A royal son prolonged a noble line, when a splendid gem lit up our darkness. Great Athelstan, glory of the country, way of rectitude, noble integrity, unswervable from the truth"... [click for more]

Every year on the anniversary of his death, proud English men and women still show their respect by placing flowers on the spot where the last truly English King fell in battle. "Our King Harold. Warrior King. Man above all others. Did his duty before God and his people. 1000 years on - courage remembered, sacrifice never forgotten"... [click for more]

Little or nothing is known about the early life of Wat Tyler. Some sources claim that in his youth he joined the English army and was cited for bravery at the battle of Poitiers as well as being present at the Battle of Crecy and various navel battles against the Spanish and French... [click for more]

"Though God hath raised me high, yet this I count the glory of my crown: that I have reigned with your loves".

"I think that, at the worst, God has not yet ordained that England shall perish"... [click for more]

"But let them take heed that if they go homeward, for if I find them in my way I will surely sink them". Born in Devon to a sea-faring family, Drake went to sea from an early age with his cousin Sir John Hawkins. His pirate raids against the Spanish ships off the coast of America brought him and his queen; Elizabeth I vast riches... [click for more]

The name William Shakespeare is often associated with one of the greatest poets and dramatists of all time, and more importantly, from the 17th century onwards his works helped shape perceptions of England and what it meant to be English.... [click for more]

So begins one of the hundreds of strange and imaginative poems of William Blake,
Born in 1757, he was a boy who left school as soon as he had learned to read and write to go to work in his father’s hosiery shop in London,. [click for more]

"England expects that every man will do his duty". With these words Lord Admiral Horatio Nelson successfully inspired his squadron before the Battle of Trafalgar. Admiral Nelson was a complex leader. A fearless warrior who balanced a personal longing for honour and glory, with a compassion and respect for his men... [click for more]

“Where hardy heroes nature’s weapons wield.
He stood unconquered, champion of the field.
Time counts him out. But memory will remain.
We ne’er will look upon his like again.”... [click for more]