"Blessed father of your country. Harold, marked out by your merits. You, our shield, fist and sword".

Mention King Harold to anyone and 9 times out of 10 you'll get the response, "isn't he that geezer with the arrow in his eye?". Well to many people he is one of the great unsung English heroes. After all, he gave his life for our country and came within a whisker of becoming one of, if not the greatest general of the Middle Ages. Unfortunately, fate conspired against him.

Now the Scots have William Wallace, and they can keep him. Because if anyone ever gets round to making a film about the life of our King Harold it would make the exploits of old William look like a Sunday afternoon stroll, and what's more, if the film was ever made, you could tell the story exactly how it was without having to pad it out with a load of rubbish made up by some script writer in Hollywood (thanks for that Mr Gibson). 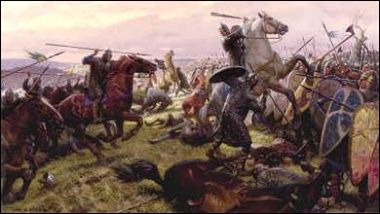 King Harold's status and achievements have been overshadowed to a large degree by the events of 1066 and the bias put forward by Norman historians. In reality he deserves to be recalled as one of England's greatest rulers and the last Anglo-Saxon king. Harold rose to power through royal service and overcame all problems which were thrown at him, including a period of forced exile.

During his lifetime he fought in Ireland, on the continent and was the first English ruler to actually go into Wales and beat the Welsh in their own country using both his infantry and navel forces. The defeat he inflicted on them was so complete that the Welsh actually killed their own king and bought his head to Harold.

While Harold was the Earl of Wessex, King Edward the Confessor began to increasingly rely on Harold's military and diplomatic skills and rewarded him, when on his deathbed and in the face of an impending invasion, he nominated Harold as his successor.

Once crowned king Harold had to move quickly. He mobilised his forces and awaited William the Conqueror's invasion which he knew was coming. While Harold waited with his army on the south coast an invasion came unexpectedly from the north. King Harald of Norway, who at the time was the most feared and experienced warrior in the western world, had invaded with a huge force of Vikings. Harold immediately gathered his forces and marched north to meet the Vikings, completing the 190 miles in under four days. Surprised by the speed of the English march, the Vikings were caught unawares and their army was completely decimated, although the English army also suffered many losses. The Norwegian army had come to England in over 300 ships, the survivors left in less than 20. When asked before the battle what part of his kingdom Harold would give to the Norwegian King he replied that he would get no more than "seven feet of English ground, or as much as he is taller than other men". Harold made good his promise and the feared Norwegian king was left on the battlefield where he fell.

Almost immediately after the battle news came to the English that the Normans had landed on the south coast and the English army was once again forced into the long march south. On October 14th 1066 it was a much depleted and weary English army that faced the Normans at the battle of Hastings. Even without any cavalry or archers, the English fought the Norman army all day. In the end only the element of chance could finally resolve the outcome of the battle when Harold received a mortal wound from an arrow. Without their King the remnants of the English were gradually ground down by the Norman cavalry and archers. The King's Housecarls, his own elite troops, died to a man around Harold's personal banner "The Fighting Man".

This man was everything the Scots would love William Wallace to be and more. He was OUR Braveheart who died at our Alamo. A true patriot who put his people and his country before everything else and displayed many of the qualities and attributes that we hold dear in our great nation. He took everything that fate could throw at him and responded with determination, an iron will and true English courage. But in the end not even this was enough.

After the battle Harold's sons and daughters fled abroad. His daughter Gytha had a son, Harold who went on to become the Grand Prince of Kiev. This Russian Harold had a daughter called Ingibiorg who later married Cnut Lavard of Denmark and bore him a son who became King Valdemar of Denmark from whom the current queens of both Denmark and Great Britain are descended. In this way the blood of King Harold Godwineson, runs again in the veins of the rulers of England.

Every year on the anniversary of his death proud English men and women still show their respect by placing flowers on the spot where the last truly English King fell in battle, protecting his country and his people.

"In respectful and grateful memory of our King Harold, the last English king, and all those who died that day defending our island, their homeland".

"King Harold, unconquerable except by death".

"Our King Harold. Warrior King. Man above all others. Did his duty before God and his people. 1000 years on - courage remembered, sacrifice never forgotten".

This poem was left in 2004. The author is unknown but under the poem it simply stated "Woden's Folk"

Here did Harold, King of England, fall and die
under the Dragon Banner, pierced through an eye;
Harold we honour you, last of the Saxon Kings,
Son of Hengest and Horsa - the Divine Twins;
Cerdic and Cynric - Sons of the Engel-Kin,
Wielding the Sword of Victory, land to win;
England - won by the Sword
-worked by the Plough

Harken, ye who seek to overthrow
this Sacred Land - this England!
Though the mass today are fast asleep,
Beware! There's Wolves Among The Sheep!